I am at an age where I should be concerned with divorce, not death; nonetheless, here I sit, an early entrant into the widower’s club. Yet, in examining my past, I believe I can aid your future. I have actually learned something about the meaning of marriage that I would like to share with you. And to top off this prolix, I will even show you how marriage fits into the pattern.

I call this the Men’s Marriage Primer because I write this from the perspective of a man; however, it reads equally well for women – just have some grace and remember that it is a man who is writing.

God tells Moses, “I have made you a God unto Pharaoh, and Aaron is your prophet.” This is a descriptor for marriage. Moses, the husband figure, is responsible for the role of God. Remember that God’s role is forming. Aaron is God’s man, the prophet. And the role of the man is naming, which we have also called filling. If the husband forms and the wife fills, that marriage will follow these steps (my apologies for this poorly alliterated list…I believe the scheme makes it easier to remember, but it isn’t pretty):

Security. The husband forms; it is his job to build the house. These are the boundaries within which the marriage will function. These boundaries can be, but are not limited to, issues such as career, finance, location and family. He is responsible to create a hedge of protection around his wife, a place in which she is secure. This arena tends toward logic.

Society. The wife fills; she is the interior decorator. She puts substance into the boundaries. Society is about sharing, about opening yourselves to a mutual exchange of each other within the security of boundaries. These issues tend to have greater emotional overtones.

This process isn’t all form then all fill. Often security takes shape after each side bares themselves through sharing. For example, you might discuss issues concerning an overly intrusive in-law, and that conversation then leads to the construction of boundaries.

I am the Art School person; my wife was the Applied Math with Computer Science person. Technically, this should mean that I’m the emotional one and she should have viewed the world more logically. Yet, looking back over our struggles as a couple, almost all of them centre around times where we either did not fill our role, or did not allow the other to fill their role.

Sexuality. When each fulfills their role, it leads to intimacy. You are not roommates or friends with benefits. Knowing, as we discussed in the last post, is found in putting on the body of; during sex, this is the process in which you participate. The consummation of a marriage isn’t found in one act of sexual intercourse. Consummate means to bring to the highest degree, to an oneness, to symmetry, and this is a process that those who are married undertake by putting on the body of their lover and, in doing so, come to knowledge. Two are being folded into one, and each time they meet the fusing becomes more seamless. Spiritually, we will know as we are known. We put on the body of the eternal symmetry, working to achieve that highest degree, that oneness, that measure of the stature of the fullness of Christ. This is the true and sure calling of the bride.

Singularity. The term singularity has meanings in various disciplines that make it an apt descriptor, a summation of what has occurred if these steps are followed.

In physics, singularity speaks of a place/event where gravity becomes infinite, thus binding two objects into one inseparable whole. Space and time as we know them cease to exist. Even this is a naïve view, for on this side of that place/event we do not know what lies on the other side. And therein hides the eternal symmetry of God.

At its simplest, this is about Oneness. Biblically, we are told that marriage is about the process of becoming one flesh. A note to men: if she cries during sex, this may be a good thing.

Now, let’s take this list and see how the pieces fit into the whole. First, let us apply Paul’s journey that we examined in a previous post.

Security, forming, conforming to his death:
The good shepherd lays down his life for the sheep. The good shepherd lets go of his own agenda, his own life, in order to ensure those he is responsible for are secure.

Society, filling, fellowship of his suffering:
Rejoice with those who rejoice; mourn with those who mourn. Sharing is obligatory if you desire intimacy. The triumphs and trials of the one must be shared by the other.

Sexuality, power of his resurrection:
This strikes at the idea that Christ was resurrected only in spirit. Resurrection is about body, and it is about life. Sexually, when two bodies are joined, new life is a result.

Singularity, that I may know him:
When the roles are properly filled, when intimacy comes, as new life forms, there is a bonding, an oneness. This is the path of knowing, whether it is your spouse or your God.

Next, we lay in the attributes of God, as found in the post Ozymandias. Here we hit a roadblock, for convention holds with only three. We have now journeyed so far out past borders that we are even going to have to coin a new word for a descriptor.

Using as a base:
Innascible – incapable of being born, thus, self-existent.

Nothing is more fun than making your own words.

Omniscience – to see, to stake a claim:
Staking a claim all about erecting borders. Your claim stakes define where your property begins and ends.

Omnipresence – to dwell, to prove a claim:
This is about suffering. Proving a claim is the labour necessary to make good on the potential within the borders of the claim.

Omnipotence – to own, to control a claim:
This is about the reward, that joining which is found through the effort expended.

Omninnacience – to know, a Kingdom from a claim:
The ultimate effect of this process is the establishment of Kingdom. Solomon and his kingdom proceeded from the loins of Jacob, a lone man.

Finally, now that we are over the edge anyway, let me just mention that pattern is itself a border, a boundary. The pattern shows us the form of God. As was stated in Cherubim and Seraphim, the Cherubim are the guardians of borders, therefore the Cherubim should be found around the pattern. And they are. Ezekiel 2 and Revelation 4 both give like descriptors of the four Cherubim. They are placed as follows: 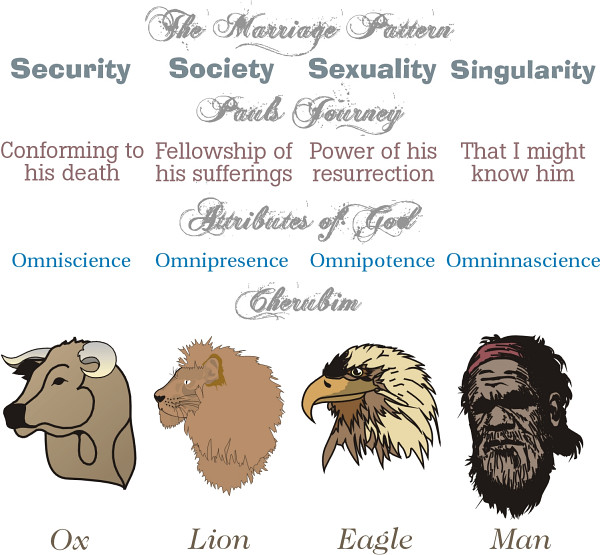 Of course, this requires a whole lot more explanation, but I think I might just have to write another book.