Game engine: the code responsible for generating the physics and AI that allow the game to play. The most popular game engine currently in the world of worlds is an engine named Unreal.

Previously (say that in a deep announcer’s voice) we dealt with the idea of Adam and Eve as eternal spiritual beings who were covered in order that they could exist in temporality. Their skin, that which gave them form, was a physical pointer to a spiritual reality. 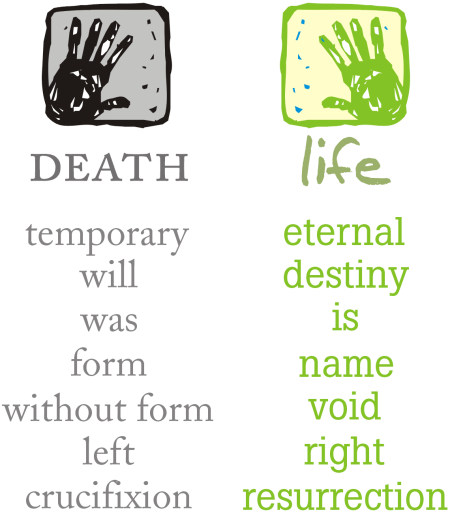 God covered man with skin; God was responsible for form. That form, as we said in the posting Purgatory, held this hell-bound man within a temporal framework. This framework is itself a larger form, and that is what we are going to look at now.

Form is a boundary, and the unbridled God is unbounded, that is to say, without form. Form is that which separates you from God. This can be done for either judgment or for protection. In order to comprehend Hell, you must understand form, as Hell is separation from God.

Form, in other words, is restraint. In Shiny Happy People we looked at the universe as a break in the symmetry of God, as the beginning of form. In the series on the rainbow we tied the rainbow to restraint. So then there should be some kind of concomitancy between the two, between the existence of the universe and the restraint demarked by the rainbow. And, naturally, we wouldn’t be here if I didn’t think that there was.

So, let us look once more at a graphic of the rainbow: 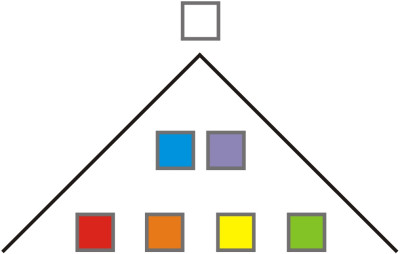 In the 90’s, the physicists ‘t Hooft and Susskind toyed with the concept that the universe was (like) a hologram. A hologram requires a light source (usually a laser) and a ‘lens’ with markings upon it. When the source shines through the lens, the appearance of something material comes into being. 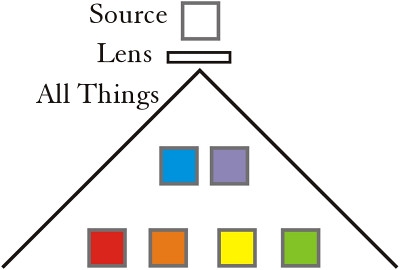 Though this is the graphic presented as conceptually more accurate when we spoke of rainbows, it is the first rainbow graphic in this posting that is closer to concept. The pyramid is itself the lens, the bounding surface. Its surface area expands through time, and the markings upon that surface are added to as it expands, giving us our flow of time. The things we call real are really unreal, they are code on a bounding surface, marks that are given life by light. There is a source, a lens and temporal material, the all things that result. 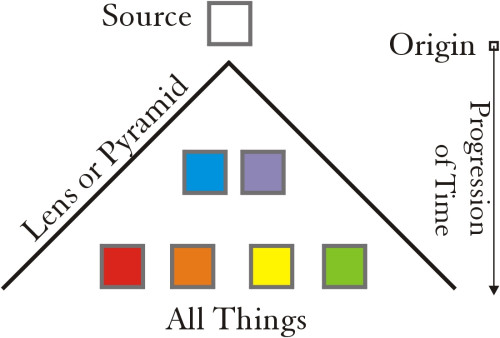 Surely he has taken our infirmities,
He has carried our sorrows;
Yet we consider him stricken,
Struck down by God,
Afflicted.

He was pierced for our transgressions.
Crushed for our iniquities.

The punishment that brought us peace
Was upon him.

By his woundings
We are healed.