For this purpose the Son of God was manifested, to destroy the works of the devil.
John the Apostle

Given the season in which this was written, minds naturally turn to the birth of Jesus Christ. And if you enquire of those minds as to the reason of that birth, most will tell you that he came to save sinners; however, this is not the tack that John takes — at least in a direct sense (though perhaps the saving of sinners is actually an indirect sense of John’s statement). But be that as it may, it is this path we will tread below.

If the pattern from The Glory of Kings

is somewhat burned into your cortex you understand that the life of Christ revolves around 3, therefore it is not difficult to believe that there are three areas that Christ needs battle Satan in order to wrest control and destroy his works.

Possibly the most obvious example of this is found after Christ’s baptism when he is taken to the wilderness by the Spirit. During his time there Satan tests him in three ways. Each of these three tests corresponds to the three areas in which Satan works. I am going to label these three:

And so it is that when the Spirit of God announces the birth of Jesus Christ, that announcement is a proclamation of the reason that Christ is born, and what he has come to earth to accomplish. That announcement raises a standard against all three of the spears of Satan’s attack.

Placed in command of these three pincers to Satan’s spears, Christ holds three distinct positions, each charged with conquering in one arena. The titles given to these positions are prophet, priest and king. The sages, the wise men of that time, recognize this truth. They bring this King of kings three gifts – gold, frankincense and myrrh – one for each of his positions.

Mankind is under attack on three separate fronts. Interestingly enough, we recognize that man is comprised of three distinct facets – body, soul and spirit. The crucifixion of Christ caused him to suffer three areas of penetrating wounds, those on his head, his hands and his feet. (The spear in his side was post-death trauma and not part of what we are currently examining) Those wounds were a door into each of the facets of man, and placed Christ in command of each of the areas under attack.

This wasn’t an insight that eluded the writers of the Old Testament. To give just one example, they speak of, “Fear, the pit and the snare.” 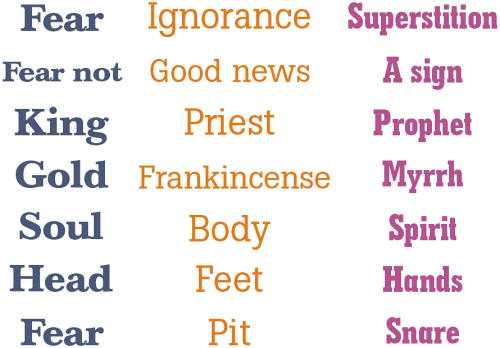 So, how does this aid us in combating our own ignorance? It is my role here to supply weapons, not doctrine, but let me give you one avenue of exploration.

Take a look at the 20th chapter of Revelation. Here we find that Satan is chained and then locked in a pit for a thousand years. If we look at our chart, we find that a pit lies in the second column. We can then surmise that this act has something to do with knowledge, with the battle against ignorance. Isaiah tells us that there is a time coming when the earth will be full of the knowledge of the Lord. We can draw a tentative line between these two events. Continue drawing out paralleling scripture in this manner and you will soon have a web of information from which understanding can be discerned.

As I said, I don’t want to poison your well with my extrapolations. If you are interested, use these tools to start your own examination. My two suggestions are that you never hold what you think too tightly, and that you remember not to jump between levels of perception as we discussed in another posting.