There are four ways, and only four ways, in which we have contact with the world. We are evaluated and classified by these four contacts: what we do, how we look, what we say, and how we say it.
Dale Carnegie

The biggest mistake we make when it comes to the examination of pattern is in thinking that we are participating in an intellectual exercise. Our lack of spiritual language (see The Glory of Kings

) inevitablizes the use of intellectual tools, but don’t make the error in judgment of thinking that pattern lives in the mind.

The scriptures tell us that everything that is seen is made out of things that are not seen. Four, which is unseen, governs the world around us, which is seen. This only appears complex because it is hard to explain. Unfortunately, like Morpheus in The Matrix

(riffing on Plato’s Theory of Forms), “I can only show you the door, you’re the one that has to walk through it.”

Our previous post ended with a brief examination of what I shall call the Rule of Four. The world around us conforms to this rule, and so some awareness of its existence can go a long way in aiding your understanding of why things are. Let’s start with the Greeks, as this concept was embedded into the way they thought. For example, they perceived the basic building blocks of all things as four elements. Let’s add these to our previous list:

Much of the Greek language is based around four words that complete a concept. Most people reading this are probably aware of the four Greek words for love; however, this isn’t their only quadruplet. A quick look at some of these: 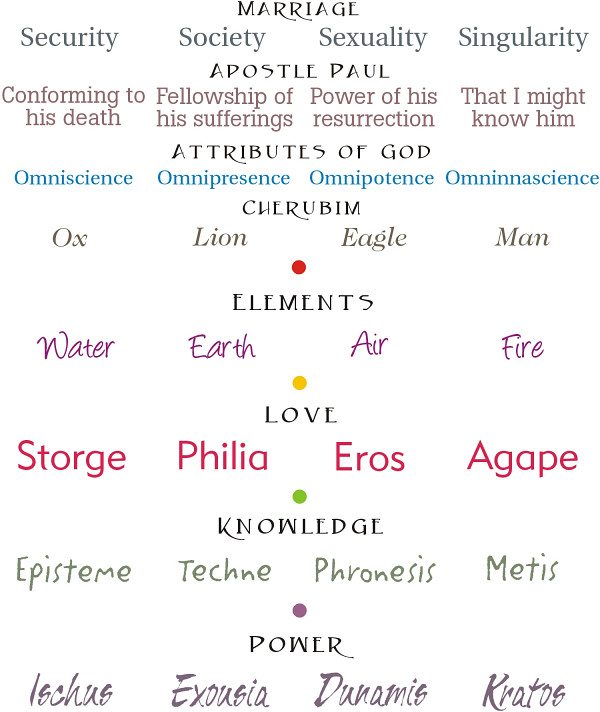 I’m strolling a bit past my comfort zone; don’t take my categorization as gospel. It’s the concept I’m pushing here, not the specifics.

Anyways, moving on. You may have learned in a physics course that there are four fundamental forces in the universe. Every force at work originates with these elemental four. They are as follows: 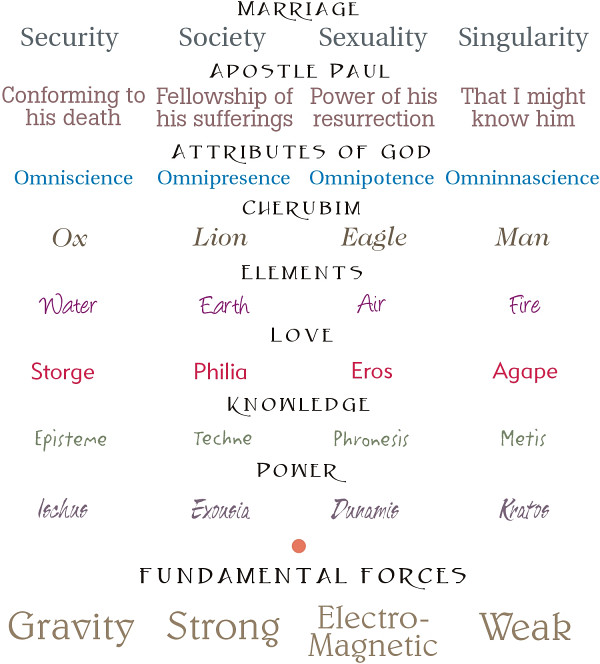 The universe folds on a hinge of four. The Greeks saw this as a tetraktys, a four-fold progression. And, if you remember the post Lucifer, the Universe and Everything, there was a diagram that showed how history folds on a hinge of four. These four hinges are also known as the Four Horsemen of the Apocalypse. You will find these horsemen in the sixth chapter of Revelation. Below is the diagram of histories folds, with the four horsemen at their appropriate interstices: 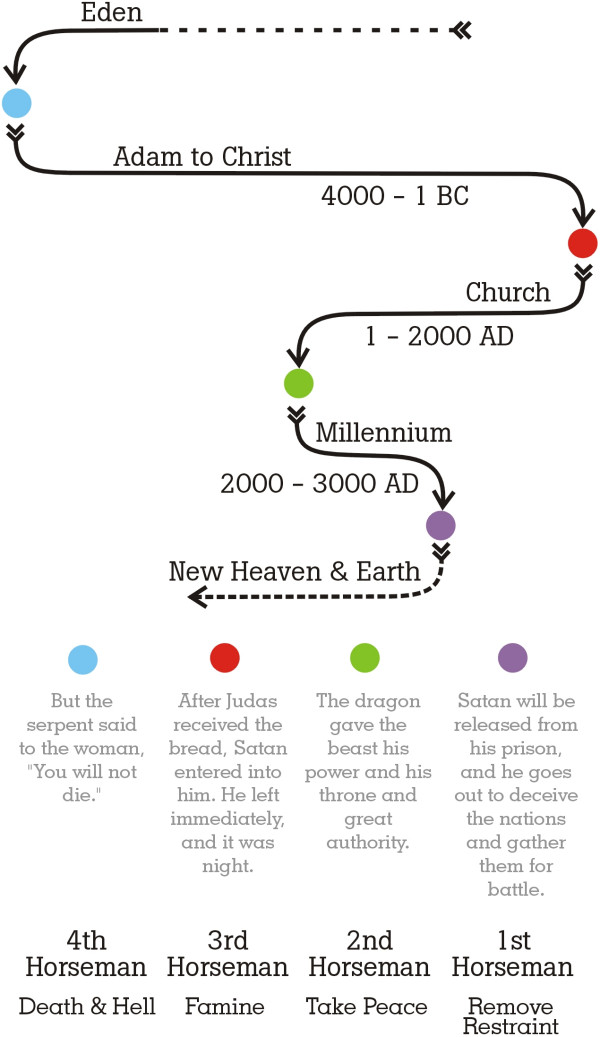 “But they are backwards,” you exclaim. I’ll have to explain the reasoning some other time; just remember there is a hinge.

Given our familiarity with what is seen, it is easy to start building the unseen out of what is seen. That would be a mistake. There is no substitution for the process of coming into relationship with God. That relationship will naturally lead to a comprehension of four, and thereby you will come into an understanding of the world in which we live.

Simply put, when you know God, the secrets of the universe will be laid bare before you.