That has to be one of the more elegant Emergence style titles I have ever written. Attention grabbing, a touch irreverent, evocative – all the elements necessary to lead the marginalized into my one-sided dialogue. Though in the end it is a bit hypocritical, as I have a bit too much Pentecostal holiness in my blood to ever more than dance around at the edges of real Emergence.

Having said that, I am going to immediately attempt to take a hammer to fundamental Christian doctrine, but hey, as Mr. Bennett says in Pride and Prejudice, “For what do we live, but to make sport for our neighbours, and laugh at them in our turn?”

It would be interesting if we could read a Bible that had been rewritten to parallel what we are taught. One verse that would immediately suffer would be that most famous verse, John 3:16. The new version:

For God so loved the world, that he loaned out his only begotten son, so that anyone who believes on him will not die, but rather will be given eternal life.

I was out in the sheep pasture one day and I had an epiphany. I could live my life out in the pasture. I could sleep in the rain. I could eat hay. I could bleat. If surgical techniques were advanced enough, I could be given a rumen and grow wool. I could even, like Orwell’s horse 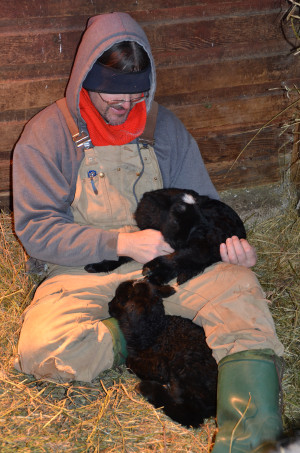 The same is true of Christ. Paul tells us that Jesus did not view his equality with God as something to be eagerly retained, but let it go in order to become a man. Have you ever gone to one of those company parties where they rented sumo suits? You don one of these sumo suits and pretend to be a sumo wrestler. And at the end of the day you take the suit off and go back to being yourself. Spiritually this is the doctrine of Jesus in a sumo suit. He donned this suit, came to earth and pretended to be a man. And at the end of his days he took the suit off and went back to being himself. Therefore God did not give him up, but rather lent him out.

The problem is that the price of redemption demanded a sinless man. Not a sinless God in a man suit. And a man is only a man if he shares in the eternal destiny of mankind. So then what about this hypostatic union, this all man / all God Jesus? Any Godhood he possessed could not have been retained, because we are told that he stripped himself of who he was. This is why it says of God that he gave up his son. Their relationship in its past form was forever severed. Jesus now relates to his father as a man relates to God.

But Christ, quoting the Old Testament, also says to men, “Are you not Gods?” If Jesus possesses divine nature, which I believe he does, then that nature rests upon a man.

If a man cannot be glorified, then Christ could not be raised from the dead.

This is why a previous entry spoke of our union with eternal life, our acceptance in the beloved. We become who he is, just as Christ did.

This Jesus, this man in whom the Godhead was pleased to dwell, is judged and rewarded just as any other man. But he is also first among many brethren. He is given a name that is above every name and we will all declare him to be Lord. He is the one who has ascended on high. God’s goal was to make man in his image, and his success begins with Jesus Christ. He is the man, as we are told in Colossians, who is the exact image of God’s very being. And it is through this man, this perfect man, that all men can approach the living God.