I’m sure you’ve heard some variation of the famous monkey-typewriter thought experiment, such as:

Given an infinite amount of time and a typewriter, a monkey will eventually type the works of William Shakespeare.

Well, I have another one for you:

Given an infinite amount of time and a stone, a monkey will eventually throw the stone faster than the speed of light.

Now, that’s just stupid. And so it is, but it exposes the monkey in the experiment. These types of games have a habit of ignoring limits. 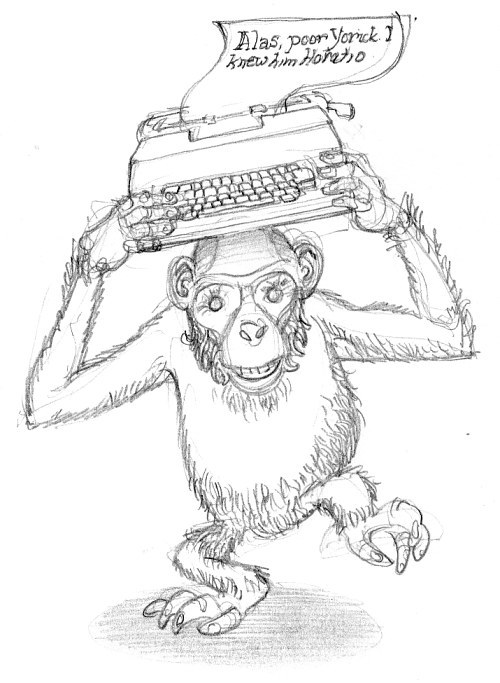 I know the monkey is just a placeholder for randomness, but let us swing with this monkey for a bit. The Paignton Zoo stuck a keyboard in with a troop of monkeys. This resulted in the monkeys producing long strings of s’s. They then capped their work by crapping on the keyboard. The whine was that the test was imperfect, given the keyboard has an auto-repeat feature. And this perfectly points out the limit problem. This monkey-typewriter experiment might work if:

In other words, we could state:

A statement that logically conforms to this type of premise is unarguable, but also completely useless. In this case it is worse than useless, because the point of this thought experiment was to exclude intelligent design from perceived order.

We can’t stop there. What if we found an alien race that hissed for language, would the macaque’s string of s’s suddenly become the works of William Shakespeare? Alternatively, what if we went to an alien planet, and their squiggles to get their pens working turned out to be the works of William Shakespeare in English? This, then, delivers our axiom:

Order is derived from the perception of the viewer.

This is what makes the vantage point of truth so powerful.

We see a line as order, so anything that comes in a line must have been designed. We see path as chaos, so the more twisting the path, the more likely we are to declare it random. This path leads to Carolyn’s maxim, riffing on Arthur C. Clarke

We are quick enough to say that God is infinite. Yet, because infinity breeds complexity, at the same time we scramble around to try and make him as simple as possible, because we don’t want to see him as random. Ask someone to envision infinity, and it is likely they will see it as a line or a string, not as a matrix in three, or more, dimensions.

Arguments both for and against God make this kind of mistake, but perhaps there will be more on this next post.